The Company in a Nutshell

Telus is one of the big three wireless service providers in Canada, with its 9 million subscribers nationwide constituting almost 30% of the total market. It is also the ILEC (incumbent local exchange carrier; the legacy telephone provider) in the western Canadian provinces of British Columbia and Alberta, where it provides Internet, television, and landline phone services. It also has a small wireline presence in Eastern Quebec. In recent years, Telus has moved to bring fiber to the home over most of its wireline footprint as it upgrades its legacy copper network, leaving it able to compete on more equal footing with cable providers. Wireless is the more profitable of Telus’ two segments and its proportion of total sales–above 50% since 2010–has consistently grown over the last decade.

Telus has been showing a very strong dividend triangle over the past decade. The company can grow its revenues, earnings, and dividend payouts on a very consistent basis. Telus is very strong in the wireless industry and now attack other growth vectors such as the internet and television services. The company shows the best customer service (read lower churn) in the wireless industry. It uses its core business to cross-sell its wireline services. The company is particularly strong in Western Canada. Telus is well-positioned to surf on the 5G technology tailwind. 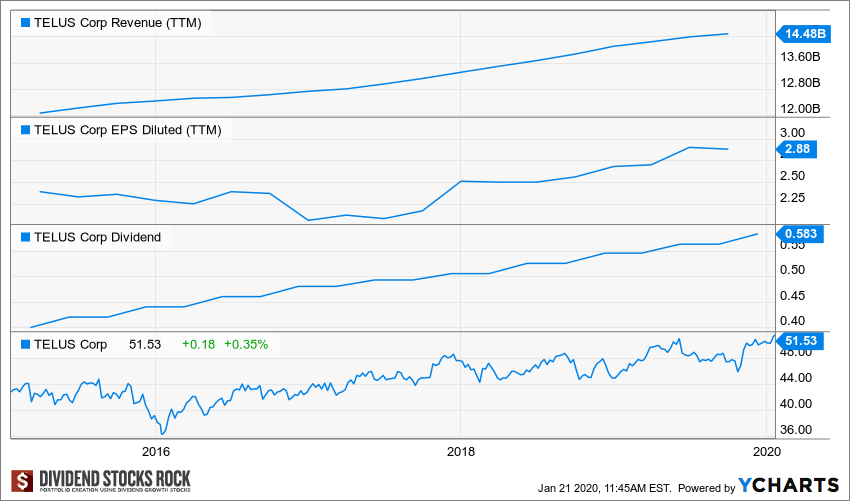 As competition increases among the Big 3 and with the arrival of Shaw Communications (SJR.B.TO) in the wireless market, margins could be under pressure. Plus, the Federal Government would like to see more competition against the “Big 3” and will likely open the doors for new competitors going forward. Telus will eventually have to think about other growth vectors once the wireless market becomes fully mature. TV & internet will not be sufficient to avoid Telus becoming another Verizon (VZ) in 10 years.

This Canadian Aristocrat is by far the industry-best dividend payer. Telus has a high cash payout ratio as it put more money than usual into investments and capital expenditure. Capital expenditures is always taking away lots of cash flow due to massive investment in broadband infrastructure and network enhancement. Such investments are crucial in this kind of business. Telus fills the cash flow gap through financing for now. I’m not worried about it since management continued to raise its dividend and kept a payout ratio under 80%.

Video Tutorial: How to Read the Stock Cards DDM Valuation